A couple of years back, the FWBO changed its name. The post below explains the real reasons why this name change was necessary, namely that, despite years of trying to escape the stigma arising from revelations of  long-running and widespread sexual abuse in the Order, they had been unable to put the scandal to rest. The abuse came to light in the  FWBO Files, an investigation into and analysis of the doctrines  of the FWBO by the British Buddhist scholar Gary Beesley

When the article below was published, one of the links it contained led to an extensive plan the FWBO web team devised to bring the Files down the Google ratings and thus quash the scandal. When the web team saw this, they removed all documentation and replaced it with a short, rather childish message mocking the FWBOs critics and concealing their plans, despite the fact that a) the plans had been disseminated throughout the Order and b) the allegations in the Files were all true-just click on the link and you will see the lies! The new page read:

Here's what to do (it's easy really!)
1. Close Your Eyes
2. Imagine something perfectly horrid (like those nasty nasty files!)
3. Blow Gently
All gone!
See - it's all in the mind!

Another link led to a supposedly independent website set up by the UK Network of Buddhist Organizations, claiming (totally incorrectly) that all allegations against the FWBO had been 'thoroughly discredited' (None of the allegations have proven to be untrue). The original linked-to article was removed but I have now ensured that you can read the original; just click on the link!

So here is the article along with, beneath it, images of the plans originally posted by the FWBO to undermine the Files. Obviously, the plans didnt work and, in the end, the Order was forced to change its name.

What the original pages prove, as well as the real motive behind the name change, is the thoroughly disingenuous nature of the FWBO's web team, not to mention the contradiction between the publicly made promise to be open about and learn from their past mistakes as opposed to the rather cynical adjustments made to their public profile in their long running plan to hide them


The FWBO, dogged for years by allegations of misconduct, elitism and cultish behavior, has found the perfect way to avoid criticism-change it's name! From now on, the Order will be known as the Triratna Buddhist Community.

This is not the first time an organization has changed its name to protect itself from allegations about its own,checkered past; the Moonies did it, waning multi-national businesses do it, even dodgy fitted kitchen operations have proven that an annual declaration of bankruptcy and a rebranding under a new name is the perfect solution to flagging sales and bad press. So, the tactic is not unprecedented and, indeed, has a proven history of protecting the guilty from the scrutiny of the light of truth.it's also a well documented instance of cult behaviour....honest!


Surely, there must be another reason for this sudden change? After all, it can't just be about reputation-in Buddhism, those concerned about their reputation are deemed 'worldly beings' rather than followers of the Buddha's teaching.


Well, yes, there is another reason, that being the need to limit the seemingly unceasing damage done to the Order by the content of the infamous FWBO Files (still uncontested in a court of law after more than a decade), the detailed expose of the Order and its leader's perverse activities that first appeared in 1997.

Since that time, the FWBO's IT geniuses have been working flat out to discredit the Files and bring them down Google's international ratings-they even set up an official, in-house webpage on how to bring the FWBO Files down the ratings! ( http://fwbo-centre-support.org/internet/thefiles )


But all to no avail! no matter how hard they tried, the FWBO Files and related sites such as http://www.ex-cult.org/fwbo/ have remained at the top of Google.com's 'FWBO' page right down to the present-a quick glance at today's ratings, places the Files and related documents in three of the first five sites. And this a generally how its been ever since the Order's shenanigans were exposed all those years ago!


So, what to do? Well, they tried lying ("It only happened in one place, a long time ago"-fact: It is now clear from the FWBO's own, 'insider' publications that the ritualised male sexual abuse that took place in the Order was widespread and continued at least as far as the late 90s), defaming their critics (see L Ron Hubbard on 'Attacking the attacker' and the Scientologist's policy of 'Fair game') and even utilising supposedly independent organizations to disingenuously denounce the Files as having been 'thoroughly discredited' (http://nbo.org.uk/nboweb1/Background/nbofiles.htm The NBO executive and sub committees are, entirely coincidentally, dominated annually by a number of FWBO seniors.)


But no, none of this has worked. While telling the truth might well have been the way forward from a Buddhist perspective (its kind of, er, fundamental and indispensable for genuine Buddhists), the FWBO (oh, sorry, the TBC......or is it the FTBO) have chosen as their next tactic the classic name change! 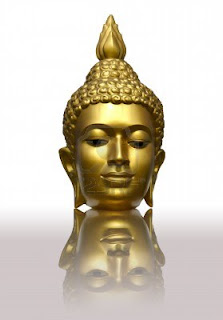 Yes, take a look at Brighton Buddhist Centre's page for instance, and you will find that, apart from a few links and email addresses, all reference to 'FWBO' has gone! Nothing. After all those years of working to build up its reputation, the FWBO have now decided that enough is enough and, in order to protect themselves in the future, the old name will be left to dissolve back into the mists of time (though as quickly as possible please). Indeed, check many of the Order's sites and you will find the same interesting phenomenon: a huge international organization has disappeared overnight!


So the name fades and gradually people stop thinking of, or referring to the Order as 'the FWBO'. Those interested in finding out whether they have stumbled across yet another ("Yes, we're giving them away!") UK Buddhist business set up with the sole intent of dominating Western Buddhism and with a history of cultish behaviour, suicides, mental illness, sexual abuse will no longer find information that might help them on the web because the less than scrupulous have yet again done something to hide the truth from them.


So, the REAL reason for the name change was...? You guessed it! Once again (!) its a desperate attempt by the FWBO to bury the past and keep right up there in the popularity stakes. What is this: Buddhism in the West or the X Factor?


One final question: How come an 'Order' (shurely shome mishtake?) that claims to be stripping away cultural accretions and creating a Buddhism entirely relevant to the West has decided to change its name from an entirely Western format (Friends of the Western Buddhist Order) to one containing the Asian word 'Triratna'? Still, I guess 'Urgyen Sangharakshita' (cue muffled titters from knowing audience) sounds a lot more impressive than 'Dennis' from Tooting. Bless.


Ah well, at least when Dennis is gone and the name has been changed, the past will be forgotten............D'you think? I suspect that, until the FWBO (or whatever they want to call themselves that particular week) does a little more public acknowledgement of its past and sets about repaying its debts (Lesingham House?Rightful owner?), 'little hiccups' may continue for a good deal longer than expected.


The trouble with reaching the upper branches on the tree of fame is that the branches there are thinner and its also further to fall. Do I hear the sound of sawing? 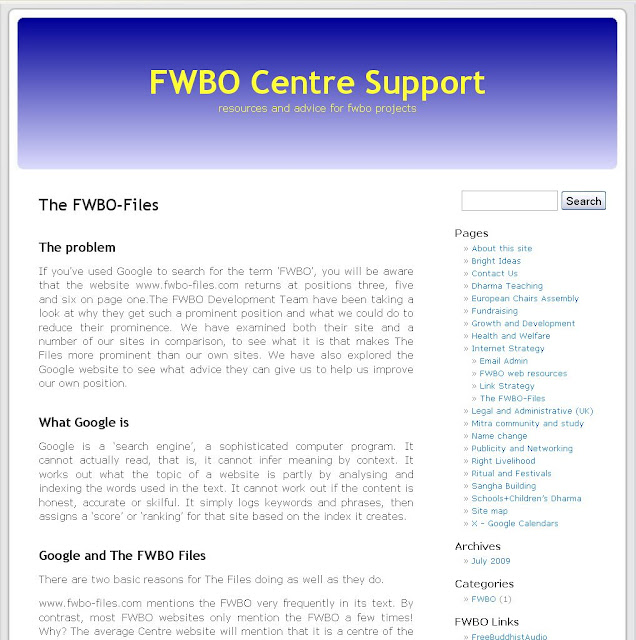 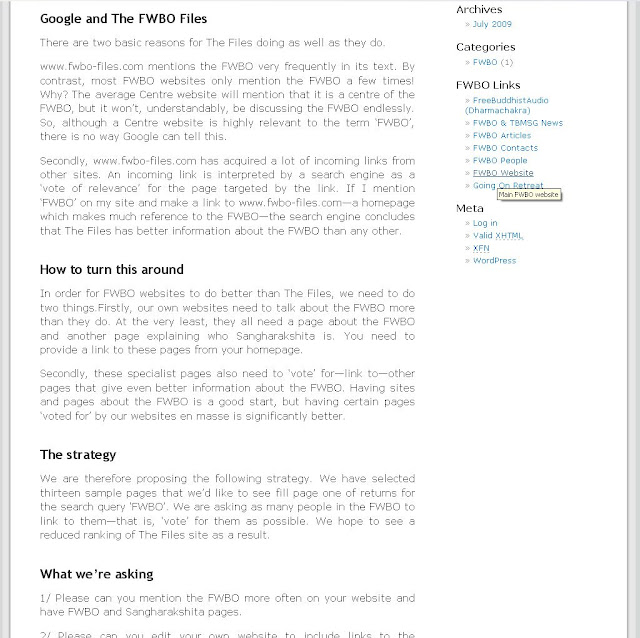 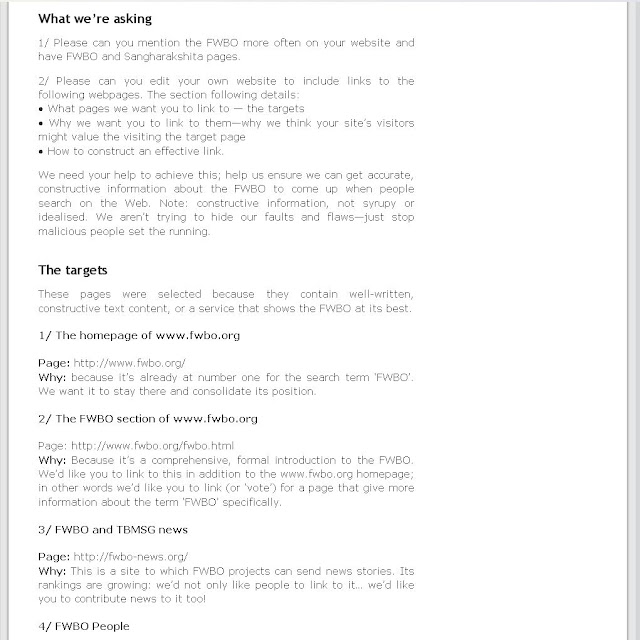 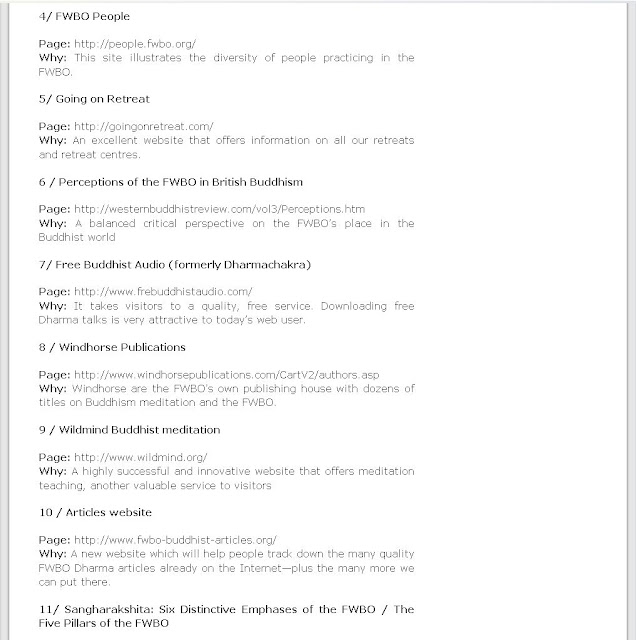 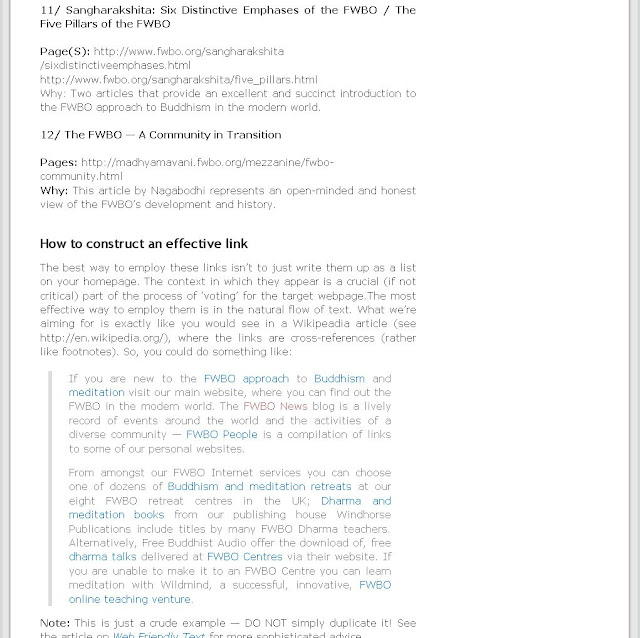 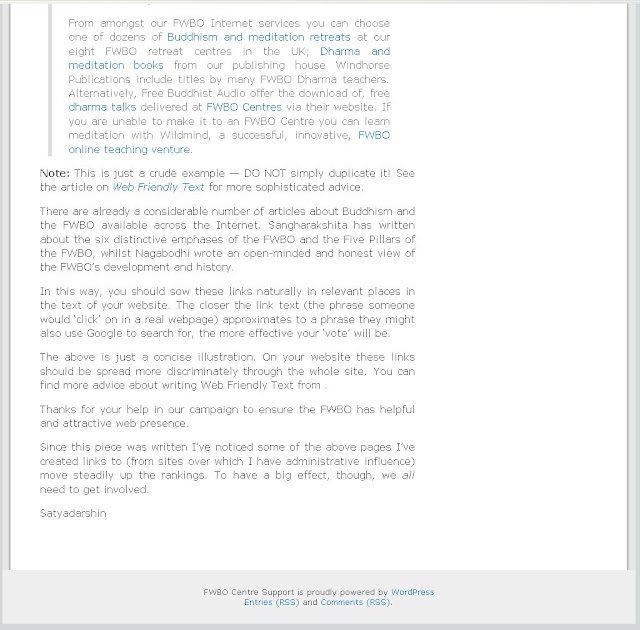