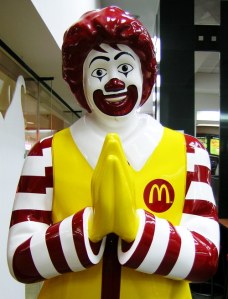 In 1995, sociologist George Ritzer used the term 'McDonaldization‘ to describe a process by which modern society has taken on attributes which normally characterize fast-food outlets and the manner in which they are managed to achieve dominant market share. The term is similar to the Weberian term 'rationalization‘, whereby actions become determined not by tradition but rather by calculated, rational considerations of how to achieve a desired goal Here, custom and tradition are replaced by systems of scientific management, administered by an impersonal bureaucracy with an obsession for optimum output.

Ritzer attributed four main components to the process of McDonaldization:

Efficiency refers to the optimal method of achieving a specific end in the minimum of time and with the minimum amount of effort and cost.The idea of efficiency is specific to the interests of the industry or business, but is typically advertised as a benefit to the customer. Examples are plentiful: the drive-up window, salad bars, fill your own cup, self-serve gasoline, ATM's, Voice Mail, microwave dinners and supermarkets (versus the old-time groceries where you gave your order to the grocer). "The interesting element here is that the customer often ends up doing the work that previously was done for them. And the customer pays for the "privilege.‟

Calculability signifies that objectives should be quantifiable rather than measured via subjective experience. Here, quantity equals quality, and the delivery of a large amount of product to the customer in a short amount of time is considered to be equal to, even perhaps more important than, the delivery of a high quality product.

Predictability is the delivery of standardized and uniform services. Here, no matter where a person interacts with an organization, they receive the same service and the same product on each occasion. Similarly, workers in these organizations perform tasks which are highly repetitive, routine, and predictable. 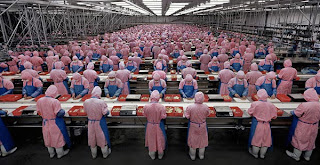 Control is a process of dehumanization and involves the putting into place of standardized and uniform employees, symbolized in an industrial context by the replacement of human with non-human technologies. In a human context, this means that the individual is less and less involved in the delivery of a given product. Without thinking and in an almost Pavlovian response, he or she simply presses a button when prompted to do so.

The parallels here are obvious. NKT educational programmes are clearly designed with efficiency ('the optimal method of achieving a specific end in the minimum of time and with the minimum amount of effort and cost'). in mind, even down to the fact that their teachers are unpaid; since a number of these are paying residents of their own centres, it might be argued that some are even paying for the privilege to teach there.

Moreover, in terms of calculability ('objectives should be quantifiable rather than measured via subjective experience'), due to the sheer size of the organization, the quality of learning within the NKT must to a degree be measured, not by the continuous appraisal of the student by the spiritual master as in a traditional context, but rather by the level of programme attended and the number of texts memorized, as is the case in the group.

In terms of predictability ('the delivery of standardized and uniform services').all of the NKT‘s educational programmes are designed to be delivered in a uniform fashion, with a minimum of deviation from Gyatso‘s intent. Hence, as Waterhouse observed, during question and answer sessions after GP teachings: "NKT teachers answer these questions, so far as is possible, based on their knowledge of Geshe Kelsang‟s writings. Where they are unsure of the answer or where Geshe Kelsang is not specific, they will usually say so.‘ 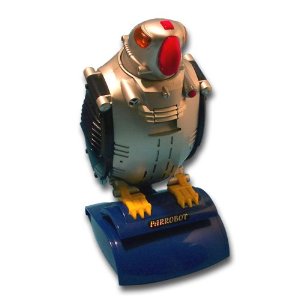 In other words, if an answer cannot be given in accord with Gyatso‘s teachings, an answer is not given. As one NKT teacher, referring to the process of teaching and learning within the organization, observed:
"Its a bit like…. teaching a parrot to talk…We‟re a telephone in a way, or loudspeakers, and Geshe-la's teachings come through your mouth. We only say what we've read, so it's not as if we‟re doing very much really except presenting Geshe-la's ideas.‟

As we saw above, Control is a process of dehumanization which involves the putting into place of standardized and uniform employees. The implicit meaning of this NKT teacher‘s words would appear to indicate that such a process is in place, indeed embodied, in the Foundation and Teacher Training Programmes of the NKT for, on a personal level, the amount of input coming from the teachers themselves in the situation is minimal. 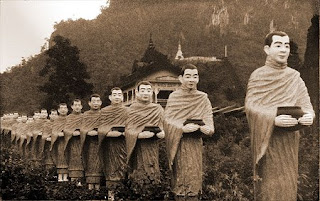 Another very obvious consequence of the dehumanization resulting from control within the NKT is the demise of the traditional teacher-disciple relationship. The pinnacle of the NKT educational programme is tantric practice. The essential foundation of the tantric experience in the Tibetan Buddhist context is the teacher-disciple relationship as exemplified by such figures as Dromtonpa and his master Atisha, or the yogi Milarepa and Marpa the translator. In the Tibetan tradition, it is the teacher who grants intiation and advises the student on which practice is most appropriate to his or her psychological make-up. Even in the earlier, non-tantric stages of the path, the development of a proper relationship with the guru is considered indispensable. Hence, the fundamental meditational texts of the latter-day Gelug tradition, for example, commence with teachings on guru devotion.In the tantric tradition, it is through a combination of formal meditative practice and practical personal advice that the teacher leads the student through the various stages of development to the stage of enlightenment. 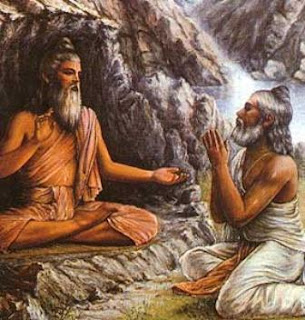 In large organisations like the NKT however, the sheer size of the organization means that it is virtually impossible for the majority of followers to develop anything resembling a close relationship with a fully qualified tantric teacher, other than in a purely imaginary context: ex members of ten years standing report never having met Kelsang Gyatso, for instance, despite holding relatively senior positions within the organization. While devotion can certainly arise and be cultivated in a formal meditative context, in particular, through the practice of guru yoga, in the latter stages of the tantric path, where the potential for subtle deviation becomes an even greater danger, the personal advice of the realised teacher is considered even more indispensable.

For many in the NKT, the tantric master is little more than a photograph on a shrine and the author of a number of works on one‘s bookshelf. This certainly raises the question of whether or not an organization of the NKT‘s size can be capable of living up to its claim of preserving the purity of the Gelug tradition for, by its very nature, such a huge infrastructure is incapable of facilitating the intimate teacher-disciple relationship which lies at the heart and foundation of the Gelug tradition‘s tantric path and which indeed is indispensable in ensuring effective Buddhist practice.

In such an organization, 'product' (enlightenment) is delivered by uniform employees offering a standard and systematic method of achievement, (in this context, passage through the NKT educational programme). To a degree, one can liken this process to buying 'off the peg‘ clothes rather than tailored ones, even to the extent that these 'off the peg‘ clothes are designed so that 'one size fits all‘. There can be little room for the variance of individual propensities within such a system: human character types are, unfortunately, not uniform. 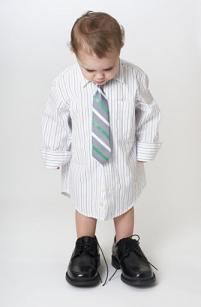 In effect, the figurehead of such an organization holds a position similar to thesole designer for a large, mass-produced clothing company whose range stretches to only a very limited number of products, rather than that of the tantric master, who resembles the skilled tailor capable of delivering bespoke clothing according to the varying needs of his or her individual, personal customers.

Rather than portraying the NKT‘s approach as the McDonaldization of Buddhism, one could argue, quite validly, for the benefits of such a system, both in terms of its ability to rapidly spread doctrine as well as to prevent a degeneration of said doctrine and teaching through preventing personal accretion: this is the philosophy which has preserved the purity of the Moslem Quran for hundreds of years, for example. 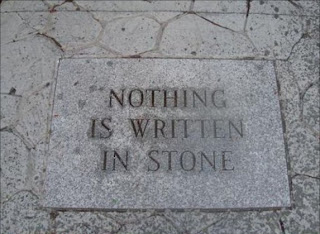 And of course, this is a problem faced by many popular Tibetan teachers, including indeed the Dalai Lama. Nowadays, there are many who are willing to refer to the Dalai Lama as their 'teacher‘ even when their only contact with him may well have been reading one of his many books. The efficacy of such an imagined relationship is certainly worthy of discussion. though it seems quite certain that a far smaller proportion of the Dalai Lama's fans consider him their actual tantric master than do NKT members consider Kelsag Gyatso theirs.

In his 'Economy and Society', Weber argued that the ultimate outcome of rationalization would be a 'polar night of icy darkness', in which increasing rationalization of human life traps individuals in a 'steel-hard casing' of rule-based, rational control. It remains to be seen which of these predicted scenarios will come to pass within the NKT.

In October 2008, the NKT‘s Chandrakirti Kadampa Meditation Centre in Toronto, Canada began offering a weekly meditation course entitled 'Turning our Mind into an Ally' which offered help in 'turning stress into peace'. The venue for the teaching was the local branch of that other well known tax avoider, Starbuck‘s. 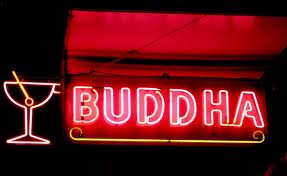